Hello from the floor of my living room. It has been a few hours since I finished my first half marathon. I managed it in 1:47:42 which is a large amount faster than I thought would be possible. My body is pretty destroyed though. It is difficult to walk. I have my legs up to stop them throbbing and my brain is completely frazzled.

The day begin at 6am when we awoke to the sound of mine and my girlfriends alarms going off in unison. It was like some sort of digital, smart phone jam. And it was not welcome. Not one bit. We had gone to bed early but had obviously struggled to find sleep as is so often the way before big events and early starts. However, once we did fall asleep we got a good few hours in.

I had a breakfast of cornflakes with milk, which is not exactly the most productive thing to have before a race but I didn’t want to try anything new considering the state of my intestines (or lack of). Note to self, must try different breakfasts on my long run days. We were in the car just after 7am where I proceeded to have a banana.

We got there 45 minutes before the race but by the time we had walked to the race start and queued for the toilets it was 5 minutes until start time. We still had my bag and decided that we would take it back to the car instead of stand in the massive queue as there was just no way we would have made it for the start. After a gentle (and quite welcome) warm up to the car and back we slotted in to the (already moving) hordes of people heading towards the starting line. We just made it although the stress of nearly missing the start was not enjoyable. Next time we will be getting up even earlier!

After the start it all got a bit hazy. We ran a lap around the start area for a mile or so before heading out on to the long road all the way to Kingston. Lots of it was on roads and cycle routes which was a bit dangerous but not too bad. One cyclist got absolutely furious with us and shouted at all the runners and nearly got himself in to a fight with a few. It was quite ridiculous really. One morning of the year, just cycle round us. It wound me up but then I realised that at least I wasn’t a douchebag.

After a couple more miles we got off the road and onto the path by the river. This was much nicer. No cars or roudy cyclists to content with. Just the river and lots of runners. By mile 5 I thought it was time for my first energy gel. I popped it down with ease and then boom I was off. I suddenly got into the swing of things and picked up my speed to levels I haven’t ever reached. Not even in a 5k. For the next 6 miles, 4 of them were sub 8 minutes per mile.

The second half of the route was back along the otherside of the river. This is where I really picked up my pace and where I found my feet in the race. I lost my girlfriend as I went overtaking people in front. Every time I looked at my watch it was under 8 minutes. I couldn’t believe it. Surely I couldn’t keep this up? After high fiving Henry VIII we crossed the river and started heading back to the finish line. More road running but with less people around so not too bad. The crowds were a bit thicker here and it was great to have the cheers of support to get you through.

I had my second gel around about mile 9. It didn’t give me quite the buzz of energy that the first did but it did focus my brain and stop my eyes from spinning around with exhaustion. I am glad I went for 2 as who knows what would have happened on the last few miles without it. As I was coming up to mile 10 I could see the 1:50 pace runner ahead and by just after 11 miles I had passed them. I was so pleased by this point and I knew that I just had to finish and I would be in with a good time.

Much of the final mile was offroad which, given last night’s weather, was pretty horrible. Muddy, slippy and very dangerous after 12 miles of hard running. I managed not to twist anything and then that was it we were on the road to Esher College. The end was near. I checked my watch and then looked up to see the 400m mark. Boom, I set off hard again. And then slowed almost immediately. I wasn’t ready. Another 30 seconds and then as we turned into the college I started sprinting. I was flying past people. It was a very good feeling to know that I still had that in me after nearly 2 hours of running.

And then with a beep of the watch it was over. My first half was over. All the months of training had built up to this point. 4.5 months after the 4th operation to remove my colon and build a J Pouch and I had just smashed a half marathon. Once I had recovered and stopped myself from passing out/keeling over/dying/being sick/crying etc I picked up my banana and coconut water and waited for my girlfriend. I didn’t need to wait long as she was there 2 minutes after me. Another great time, also under 1:50.

A great morning. A great time. A great race. Great support. Great organisation. Great marshals and great volunteers. Great everything. I am very pleased. Can’t believe we have another in 4 weeks. Let’s hope the pain in my legs goes quickly so I can get out there again in the week. One slightly odd thing is that lots of the people I have spoken to have chip times which are 1 minute faster than their actuals. My chip time was 1:46:54 which, whilst amazing, is also incorrect. Even the winner had a time which was 1 minute faster than their actual. Not sure why that is or if it will be corrected but I’m just glad I have my watch. Now it’s time to recover from the half cow I just consumed. Time for some films and zzzzzzzz. 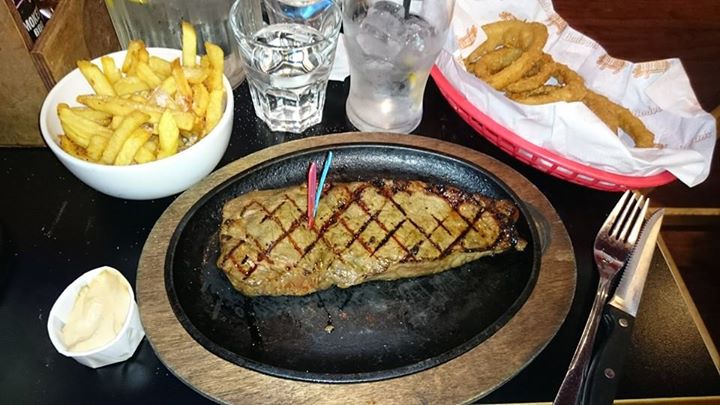